First dives are at Anita’s Reef, Deep Six and West of Eden. Anita’s Reef is beautiful, as always, the ‘whole roll of film’ rock swarming with glass fish and then, as we head north, blue-spotted stingrays are hiding in the sand before fluttering into the blue – stunning! 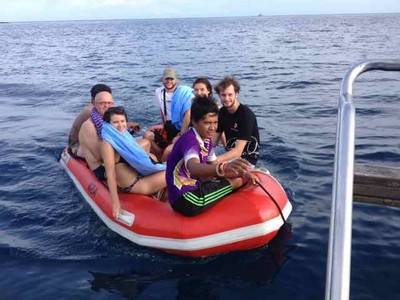 At West Of Eden Carlotta our Divemaster and I have a bet about whether we will see a turtle on the Thailand dive. I say ‘yes’ and she doesn’t believe me. I’m happy to say that I was right!! As we head north along the island a very cute turtle swoops down past Carlotta and the rest of my group. It checks us out for a few minutes before smoothly swimming by again, smiling, and heading back to the surface. Not only have I won the bet, but the dive groups are smiling and punching in the water. Brilliant! 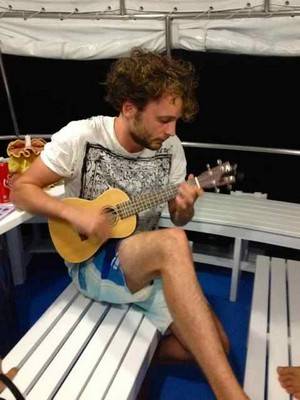 The next day we head to Koh Bon and Koh Tachai via Elephant Head Rock. At Koh Bon we always hope for a Manta Ray and today didn’t let us down. As my group are swimming along the ridge with me, I turn to check they’re ok and a Manta Ray, 4m from wing to wing, swoops by like an aircraft coming in to land. I can hear my guys shouting through their regulators in joy! 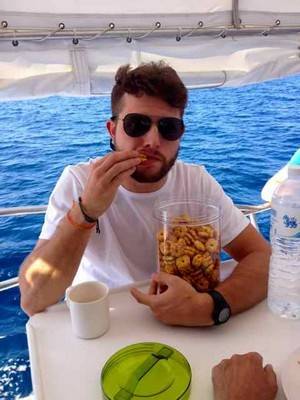 Unbelievably, when we arrive at Koh Tachai we get not one, but two Manta! As we descend onto the dome and hover in the blue a Manta sweeps by low and close. We blow it a kiss as it flashes it’s white under-belly.

The boat is buzzing as we travel via the Surin Islands (and some nice Ukulele playing from Dan and Conrad!) to Richelieu Rock. It’s a little party on the Thailand dive boat! 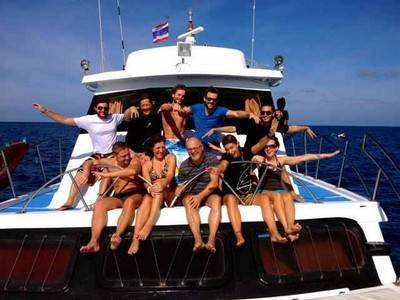 Everyone is excited at Richelieu and we get lucky, again. As soon as we hit the water there’s another Manta Ray swimming underneath us. Chris, Marcel and Konrad – who’ve been nicknamed ‘The Vaseline Boys’ for their repeated used of the product to smooth down their moustaches under their masks before the dives. Or at least that’s their story! We also see some frisky cuttlefish, peacock mantis shrimp, ghost pipe fish, big schools of barracuda and lots of little eels hidng in the rocks.

We move South at the end of day four with everyone in high spirits!