Many Marvelous Mantas for Manta Queen 2!

Many Marvelous Mantas for Manta Queen 2!

Next up were two dives at the fantastic Tachai Pinnacle. Ten minutes into dive number three and we had already seen five Ornate Ghost Pipefish, and we were staring at a huge Manta Ray circling directly over our heads! Winner!!!

All of the divers on the boat saw at least one Manta, and a few of the groups saw two different Mantas over the course of the dive. Ssswwwweeeeeettttttt!!!

The sunset dive was even better. Multiple Mantas were around for most of the dive, and at the end we did a fifteen minute safety stop with two Mantas circling us at five meters depth.

It really was fantastic, one of the best dives this season, which is saying a lot considering how's many Whalesharks we've had this year.

After an amazing dinner and a slide show featuring the smaller creatures that can be found on Richelieu Rock, it was time for bed.
We awoke the following morning to some light rain and a bit of current at Tachai, but still managed a wonderful dive, with several more Manta Rays appearing for a few of the groups. One of the Mantas had a very large shark bite in the back of its left wing, but seemed to be doing alright. Swimming around fine and just as beautiful as ever.

Next up were the usual three dives at Richelieu Rock. It was raining a bit during the journey. North, but it was not windy and there were no waves. We arrived at Richelieu on schedule and ready to jump. We saw so much cool stuff there, what a fantastic dive site that place is. Harlequin Shrimp, Ghost Pipefish, Seahorses, Nudis of all shapes and sizes, along with huge Barracuda, Longfin Batfish and big Schools of Trevally can be seen there on nearly every dive. This place is really very special, easily earning it's title as Thailand's best dive site. You've just got to see it to believe it! 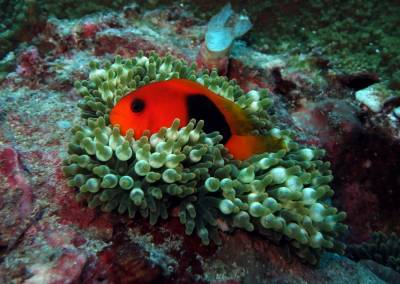 This time we switched it up for dive number nine, deciding to check out one of the newest wrecks on Thailand's West coast, the HTMS Pra Thong wreck. It went down just about a month ago, is it was new for all of us. Quite a big ship, it is a 100 meter long WWII cargo ship, laying on it's side in 27 meters of water. It has been scuttled specifically for diving, with several holes cut into the different decks to allow safe and easy penetration diving. Really fun. Good times.

The Boonsung wreck done as the last dive of the trip is always a treat. In addition to the usual suspects like Honeycomb Moray Eels, Ghost Pipefish, Nudibranch, Spearing Mantis Shrimp and A Sea Moth, we found a Spotfin Frogfish this time around. So nice to see this little guy on the Boonsung, hopefully we will be able to find him again next week... 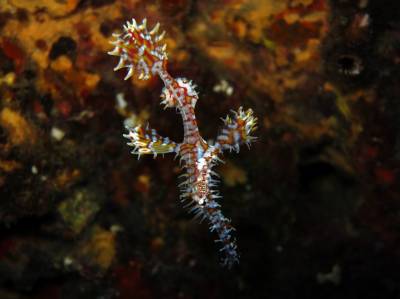 We had quite a few students on this trip again, as usual. Elea did her Advanced course with Evan, and Claudia and Heidi did their Deep Adventure Dive with him as well.

We had these five Swedish Dudes, "Team Sweden" on the boat, diving with Mattias on Nitrox and just generally tearing it up. Four of them - Jan, Bjorn, Andreas, and Patrik, along with Jennifer all finished their PADI Enriched Air Diver course, being taught by both Mattias and Joe. Cool, great work guys. Welcome to the club!
It's always sad to come to the end of the trip, but the memories from the diving and the friendships made will live on. So the bad news is that another memorable trip has come to an end. The good news? We are going out again tomorrow! Come and join us aboard Manta Queen 2 to experience your own unique three day diving adventure! Till next time... Happy bubbles!!!