Day two and things picked up a notch underwater. First dive is nice and early on the rocky outcrop between the 8th and 9th Island in the Similans called Elephant Head Rock.  Lots of swim throughs and deep pinnacles to check out. One group was lucky enough to find two adult white-tip reef shark resting on the sand with a juvenile swimming around them. Dive two is one of the most northern dives in the Similans and the last one before we head north. Christmas Point is similar to the last dive in layout, conditions and even the fish!! Sharks again in the deep pinnacles and I think the divers were starting to get a little spoiled. As we are always trying to please everyone on the boat we then headed up to Koh Bon and with a help of some nipple rubbing (an ancient good luck technique), we had a manta ray cruising around with us just off the west ridge.

The visibility at the moment is variable to say the least. There has been no current to speak of, but the sudden cold water that seems to come out of nowhere and  surround you, aptly named “green monsters”, are everywhere at the moment, and it was because of one of these that one or two groups missed the manta ray. But disappointment seems to be short lived at the moment, the very next dive on Koh Tachai we had another manta ray. It’s a beautiful site with juvenile angelfish, schools of barracuda and batfish, and having a manta cruising around the site as well was amazing.

Third day and it begins with a chance to explore the deeper bommies and pinnacles with another dive on Koh Tachai. The manta didn’t return here for breakfast, but with calm waterbit was a nice wake up. The sun accompanied us on the three hour trip north to the underwater pinnacle known as Richelieu Rock. This is a site known for macro, with seahorse, frogfish and harlequin shrimp scattered around. These are all amazing but there was anticipation in the air to see a whale shark. We heard on the radio the day before one was spotted, but after two dives with our eyes searched far and wide we hadn’t seen it. One more dive here and realistically it was the last chance to see a whale shark this trip. I thought luck wasn’t on our side, about ten minutes after getting out of the water from the second dive a whale shark was spotted from another boat. What to do? We pushed the last dive forward thirty minutes and would have to hope it was still around. It only took about ten minutes into the dive that it was spotted right next to the surface. Then we just watched it for twenty minutes as it was feeding on the plankton, circling around the groups. It was a juvenile about 4-5 m, and a very curious fellow. Not scared of the divers and it looked like the he would purposefully swim over our bubbles. A couple people even had to take some evasive action when the shark unperturbed in his quest for food would swim right at them. What a way to end the dive and the day. 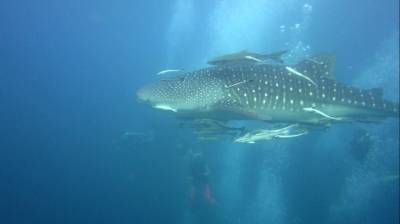 There are two dives on the last day and both are on shipwrecks, but of polar opposites. The first is the Pra Tong which is a huge navy cargo boat from WWII only sunk three weeks ago. As it is so new it is not yet covered in barnacles and coral and you can really appreciate the structure and size of it.

The last dive is on the Boonsung which is a favourite and a great way to end the trip. The usual suspects were there; honeycomb morays, nudibranch, kuhl stingrays, but the real surprise was a big marble ray hiding under the structure. Amazing trip, amazing people. Thank to everyone who came and made it an extra special trip, and congratulations to all the new advanced open water and enriched air divers. See you soon under the water!! 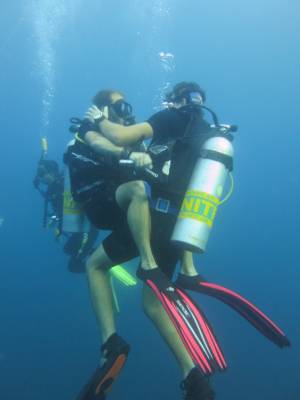 There was a lot of love in the water