Mantas and A Whaleshark (AGIAN!) for Manta Queen 2!!!

Mantas and A Whaleshark (AGIAN!) for Manta Queen 2!!!

We've got Mattias, Walter, Tom and Joe all teaching courses this trip, with ten Advanced students on board and one Nitrox course going as well.

The first dive was really good, with Spearing Mantis Shrimp, Giant Morays, Multi-bar Pipefish, and a Napoleon Wrasse all being seen. Also there were schools of Rainbow Runners, Dogtooth Tuna and Trevally circling over the reef, hunting on the thick layer of Glass fish that were covering some of the coral bommies. One group even saw a Hook-jaw Moray Eel hiding in one of the deeper crevices.

The second dive was on Koh Bon's North Ridge, and it was nice as well. More Morays, hunting fish, nudibranch and even a few Octopus were seen by many of the divers.

Next up were two dives at Koh Tachai. This place is sweet! We saw five Ornate Ghost Pipefish (two of them were pregnant)

Huge schools of Trevally and Fusuliers, a Barramundi Cod, and tons of Morays and other cool stuff, including a Manta Ray! This particular Manta was not shy at all, and at one point she stopped and hovered right in front of my dive group for a while, just sitting motionless about three meters from us, checking us out as much as we were checking her out! Awesome!

A few groups jumped in on Tachai Reef to do the navigation dive for the Advanced course, and they were lucky enough to see a small Leopard shark laying in the sand. 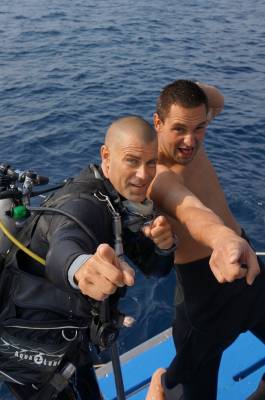 The next morning saw that very strong current that Tachai is famous for. With divers stepping in one at a time and holding the mooring line, everyone got down to the top of the Pinnacle without any problems, and from there we were able to hide from the current for most of the dive. We saw plenty of cool things, including a nice Jenkins Whipray laying in the sand at 25 meters.

Then it happened. As the sea sometimes does, it produces the goods without warning. A four meter long Whaleshark comes cruising by a few of the groups, swimming effortlessly against the current the we had been hiding from for the entire dive. What a magnificent creature, a gentle giant that brings joy and awe to everyone who is lucky enough to see them. So cool!!!

Then it was off to Richelieu Rock for three dives to round out what had already been a fabulous day.
We saw everything from Peacock Mantis Shrimp, juvenile Emperor and Trapeze Angelfish, Moray Eels of all shapes and sizes, to massive schools of Snappers, Trevally and Dogtooth Tuna. We were even able to find a baby Tigertail Seahorse and more than a few Ornate Ghost Pipefish, along with the crowd-favorite Harlequin Shrimp. These little guys are actually vicious predators, cutting the arms off of seas stars and saving them to eat later. You can just imagine the sea stars seeing the Harlequins coming, yelling to each other "Every man for themselves"!

The final day brought dives at the stunning Koh Bon Pinnacle and the crowd-pleasing Boonsung Wreck. What a nice end to an absolutely amazing trip. Always a treat in good conditions, we experienced pretty good viz and very little current at the Pinnacle this time around. Our little buddy Stewie the Stonefish was in his home as usual. Add to that schools of Bluefin Trevally, Tuna and Rainbow Runners, and a Blotched Fantail Ray, and it was a very nice dive indeed.

The final dive of our three day adventure was on the Boonsung Wreck, an old tin mining dredger that sunk in the 1980's. Absolutely teaming with life, the Boonsung wreck is always a fantastic way to finish the trip. Large schools of Baraccuda, Trevally and Fusiliers cover the wreck. Smaller stuff like Nudis and Spearing Mantis Shrimp can be found as well. Ornate Ghost Pipefish are usually around, and there are always tons of Honeycomb Moray Eels hanging out of the nooks and crannies. We have even been seeing a few small Sea moths on top of the wreck lately, and we found them again today. A few really well hidden Frogfish too! It really is a great dive, every time. A wonderful finish to an unforgettable three days!

I want to offer a big congratulations to all of our students on board this trip. Anna became a newly certified PADI Enriched Air diver, so she is now in the nitrox club. Dominic, Claire, Matteo, Carl, Brittany, Anna, Phillip, Adi, Mila and Lucas all completed their PADI Advanced Open Water course during the trip, so they are now advanced divers certified to dive to a depth of 30 meters. Yeah! Great job guys, and welcome to the family!!!

It's always a little sad to end the trip, but there is a silver lining... We are going out again tomorrow!!! Come and join us on Manta Queen 2 for our next adventure! We sure would love to have you!!! :-)