We began this past trip as always, searching for Mantas on Koh Bon's West Ridge during our check dive. We saw none, but there were plenty of other great things to hold our attention. Rainbow Runners in the blue. Octopus and Moray Eels in amongst the rocks. Shrimps and Multibar Pipefish in the cracks and crevices.

Dive two began with a briefing for Koh Bon Pinnacle. The plan was to dive the Pinnacle, and then do the West Ridge again on dive three if any of the other boats had reported any Manta Ray sightings. Well, as we were gearing up and driving over the West Ridge towards the Pinnacle, we had several reports from divers on the surface that there were Mantas directly below them. We changed the plan immediately and turned the boat. Jumped in on the West Ridge and moved West along the rocks towards the end of the ridge. Then we waited. Lucky for us, it only took about a minute before the first Manta appeared...

Moving slowly out of the blue, she swam past and disappeared. This was only the beginning. Over the next 55 minutes one and then the next came in close to the dive groups, checking out the divers as much as we were checking them out. Over the course of the dive, we figured there were at least three or four individuals making passes, although we never saw more than two together at the same time. Koh Bon - Mission accomplished.

Next it was off to Tachai for two afternoon dives. While on the way to Tachai we had a visit from a pod of Pilot Whales. They are so beautiful, gracefully coming up for air in front of the boat over and over again. After spending 15 minutes or so watching them, we continue North to Koh Tachai.

The first dive there on Tachai Pinnacle was a little wild, with the famous Tachai current set to medium power, but we still had a wonderful dive. The current backed off quite a bit for the sunset dive, making it easier to move around the pinnacle and opening up more possibilities for us. Over the course of the two dives we had so much life, everything from little Nudis and Ghost Pipefish all the way up to big schools of Barracuda and even a Hawksbill Turtle. The sunset dive was especially nice, with big schools of Trevally and Fusiliers out in the blue. Always nice to see. After that... dinner time!!!

The next morning we awoke to sunny skies and blue water. Again the current on Tachai was pumping a bit, but it was possible to hide behind many of the rocks for some of the time. A challenging dive, but still good fun with lots to see, including this really well camouflaged Ghost Pipefish:

Then It was on to Richelieu Rock. Three dives there rounded out the day, with all three being different but equally nice. Schools of Trevally, Barracuda, Snapper and Fusiliers seemed to always be overhead. Every crack and crevice was loaded with shrimp and crabs of all shapes and sizes, from the Ghost Boxer Shrimp and Harlequin Shrimp, all the way up to the big Round Crabs. Ghost Pipefish, Jan's Cleaner Pipefish and Tigertail Seahorses were spotted along with Octopus and Cuttlefish too. Richelieu really is a very special place, no wonder is in consistently ranked as Thailand's best dive site.

On the third day of diving we woke up at the new HTMS Pra Thong wreck. And old WWII transport barge, it's a very new wreck on Thailand's West coast, having been sunk just last month. Quite a big ship, its 98 meters long and 14 meters wide, laying on it's side in 27 meters of water. It has been scuttled specifically for diving, with several holes cut into the different decks to allow safe and easy penetration diving. We cruised around, entering into some of the larger holes, and peeking into some of the smaller ones. Really cool. Oh yeah, it's becoming so commonplace on these trips now, that I almost forgot to mention. This is where we saw the four meter long Whaleshark as well! So nice, at the end of the dive we were just above the wreck, beginning to move toward our safety stop, and here she comes. She was swimming lazily into the mild current, and she stayed with us for about five minutes before taking off onto the blue. A fantastic treat for us before heading back on the boat for breakfast. What a wonderful morning! 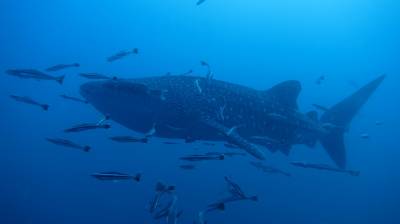 The final dive was on the famous Boonsung wreck. We had a few special finds on the Boonsung, the stand-outs being multiple Frogfish and one cute little Seamoth. So cool! 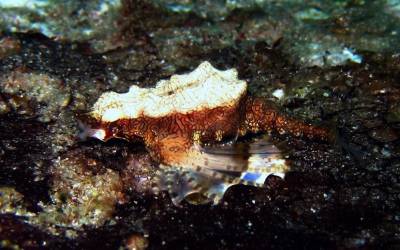 My group were practicing threat bubble ring skills at some of the safety stops, and by the end of the trip we were getting good results...

Congratulations to all the students on board. Kam taught Natalya her PADI Advanced Open Water course, and Bonnie, Matt, Ryan and Alex all completed their Advanced course with Mattias during the trip. Nice work people, way to knock it out! You are all now officially in the 30 meter club!

I must say, this season has been absolutely fantastic. The best part? It's not over yet! Book one of our last remaining liveaboard trips this season and see for yourself what all the fuss is about. This season is sure to go down as one of the best ever in the Similan Islands, and there is no better way to experience diving in the park than with us here at Khao Lak Scuba Adventures...