We have also had so many little things to show this season. Everything from Ornate, Delicate and Robust Ghost Pipefish to Harlequin shrimp and many different types of Frogfish, this season has produced sweet surprises over and over again. 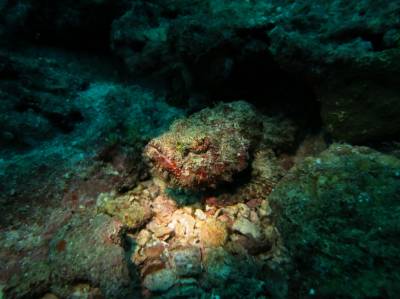 The Mantas came early this year to Koh Bon, and stayed late. The White Tip Reef Sharks were more abundant this season than in years past, being spotted regularly on many of the Similan dive sites. What a year it was...

As for this, trip number 139 for Manta Queen 1, we had a fantastic finish to this magical season.
On the first day we adjusted the schedule a bit, making dives at Anita's Reef, West of Eden, Elephant Head Rock and then a night dive at Eagle Rock. We stopped of at the beach on Island #4 as well... 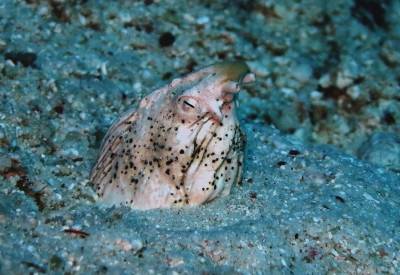 We had a surprise appearance by a Black Tip Reef Shark amongst the rocks at Elephant Head, and so many swimthroughs on the night dive at Eagle Rock, in addition to the Lobsters, Cuttlefish and the Turtle that we spotted there. It was a wonderful last first day. :-) 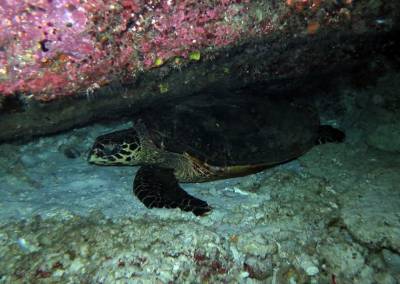 That night we slept at Koh Bon, and awoke to calm seas and beautiful conditions. The first dive of the day was Koh Bon Pinnacle, and it was really great. We saw our old friend Stewie the Stonefish there, along with a second Stonefish buddy of his. 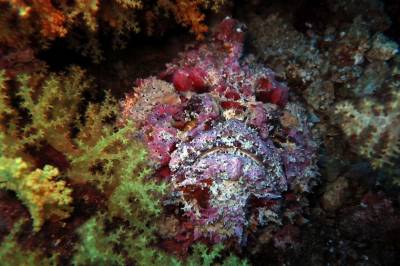 We had a school of Rainbow Runners in a tornado overhead, a Red Reef Lobster in the rocks below, and even spotted this really cite juvenile Emperor Angelfish in a small crack: 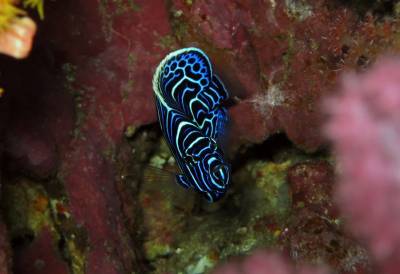 Dive two was on Koh Bon's famous West Ridge, and in the deep area at the end of the ridge we had so much life. Schools of rabbit fish and Fusiliers, Glassfish and Trevally, all moving around between the soft corals on the floor.

We had Nudibranch, and Scorpionfish around, Banded Boxer Shrimp and Multibar Pipefish in the nooks and crannies. We even spotted this Hookjaw Moray Eel deep in one of the cracks between the rocks: 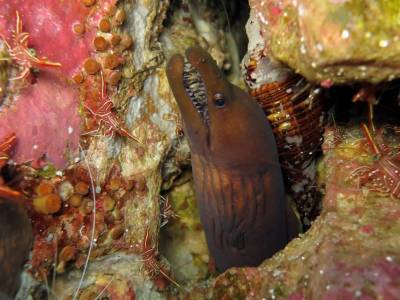 As we left Koh Bon we saw a large pod of Pilot Whales. They came near the boat and swam around for 15 minutes or so before heading off into the blue... 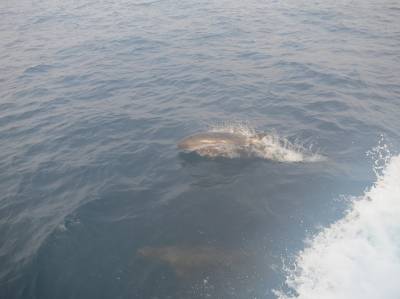 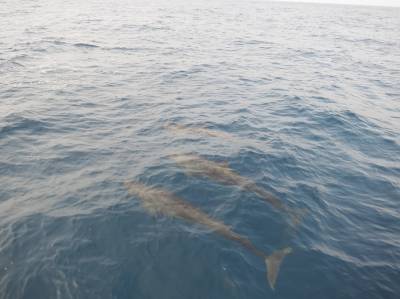 After the traditional Snooze Cruise to Koh Tachai, we arrived at Tachai Pinnacle with the current at about half power. After making our way down the line we were able to hide between the boulders and move around quite easily.

We had a big School of Barracuda overhead and so many Fusiliers swarming around us, it was awesome. 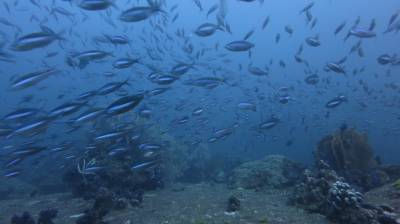 There were Ghost Pipefish, a Hawksbill Turtle, a Seamoth, a juvenile Emperor Angelfish, and one lucky group even spotted a Tigertail Seahorse among the soft corals. Nice! And of course, the ever-curious Batfish we schooling near the top of the Pinnacle. Really great. 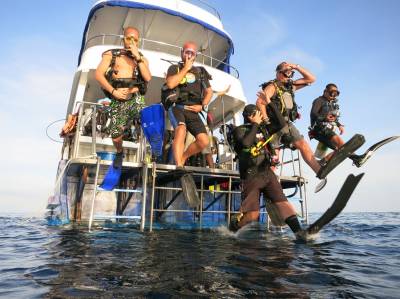 For the sunset dive the current backed off quite a lot. We saw all sorts of stuff, the highlights being two Seamoths, Ghost Pipefish, and tons of schooling fish. Some groups were at the second pinnacle, with everything from loads of big Brown Marbled Grouper, juvenile Sweetlips, and the smallest Nudis around. It was a perfect way to finish the day. 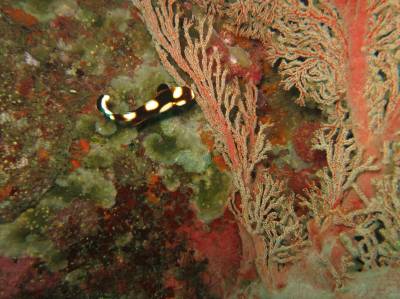 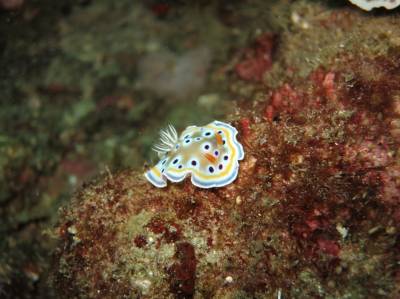 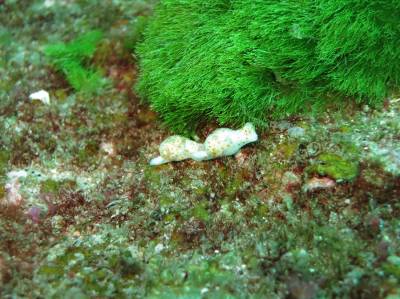 The current was mild the next morning, and all of the groups enjoyed a pleasant early morning tour around the pinnacle. There were lots of morays around this morning, plus a large school of Crocodile Needlefish over the top of the dome. Big schools of Fusiliers were moving between the boulders near the bottom, seemingly everywhere you looked. The small stuff was around as well, little Nudis and this cute little white Seamoth: 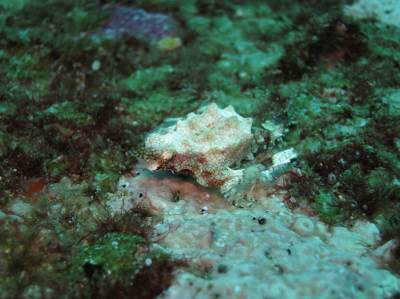 And now for our last visit this season to the world famous Richelieu Rock. What can I say about this dive site that hasn't already been said? It quite simply is Thailand's best dive site. Over the course of three dives there we spotted all of the following: Cleaner Pipefish of all shapes and sizes, Ghost Pipefish, Seahorses, Harlequin Shrimp, Boxer Shrimp, Octopus, Cuttlefish, Scorpionfish, Devil Scorpionfish. 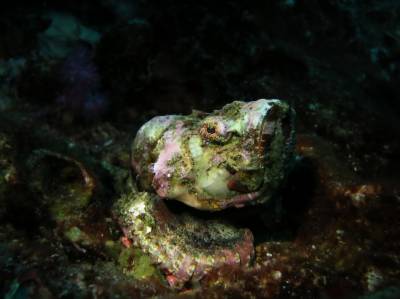 There were also many different types of Moray Eels, Hermit Crabs, Round Crabs, Trevally, Barracuda, Fusiliers, Snappers, Groupers, Mantis Shrimp... I could go on and on. That's the thing about Richelieu. It's always a new discovery around every corner. There is so much to see there, words cannot describe the experience of diving this wonderful site. 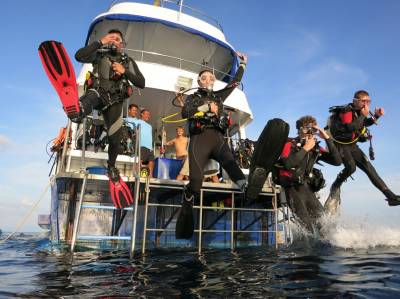 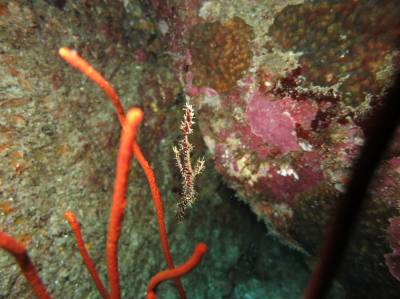 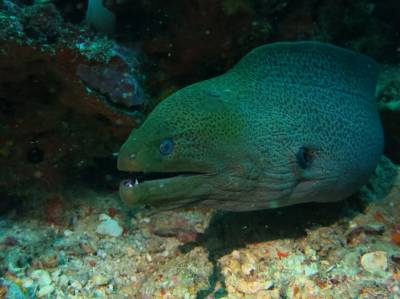 The final day brought us first to the HTMS Pra Thong wreck. Formerly the USS Dodge County, this is a 98 meter long WWII US transport ship. It was sunk in order to create another dive site on theWest coast of Thailand, and it is already teaming with life. It's so cool, a brand new wreck with a few easy penetration opportunities. 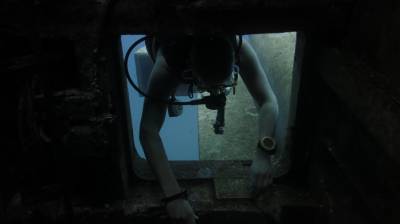 In just six weeks it has become covered in huge schools of juvenile Barracuda and Fusiliers, Weedy Filefish, Dragonettes, Cuttlefish, and a few of these really cool Hispid Frogfish. Have a look: 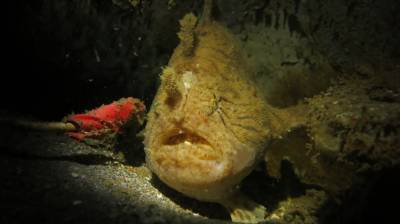 The final dive of this season for Manta Queen 1 was on the Boonsung wreck. The viz was great today, a perfect way to end the season. We made our way around the wreckage, spotting Porcupine Pufferfish, Honeycomb Moray Eels and Spearing Mantis Shrimp along the way. 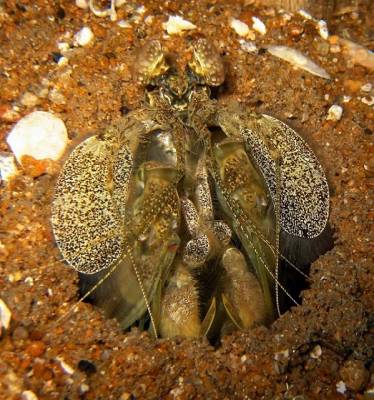 A special thank you goes out to the effort put forth by Cam and Dave. They came aboard having just finished their Open Water course, and by the end of the trip they had both completed their PADI Advanced Open Water course and their Enriched Air Diver courses! They literally tripled their diving experience on this one trip! Sweet!!!
So, this season for Manta Queen 1 has come to an end. A sad day indeed. We are already making plans for next season, when once again we will be able to showcase the wonder of the Similan Islands to all of our guests. Until then, Happy and safe diving to you all! :-) 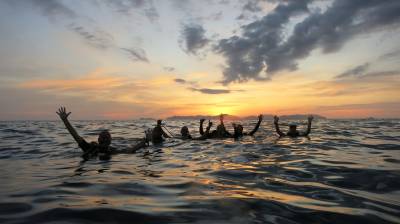