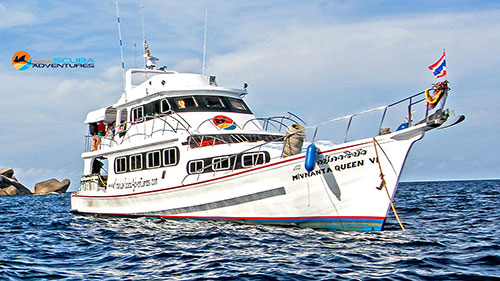 Our liveaboard vessel is 25 meters long and 5 meters wide wooden hull built boat that is manned with 4 dive staff and 6 boat crew.

All meals on board are served buffet style freshly cooked from the on board chef. Snacks and fruits are served in between dives. The dinghy gives you the opportunity to spend some time on the beautiful beaches. 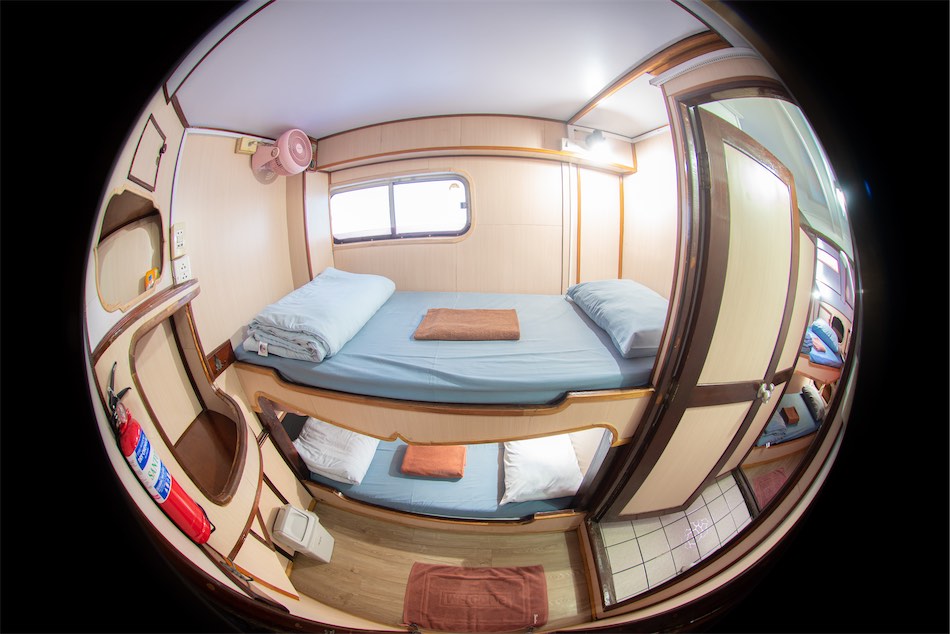 Richelieu Rock (called in Thai Hin Plo Naam) is a dive site in the Andaman Sea near the Surin Islands. It is part of the Mu Koh Surin National Marine Park although being about 18 km east of Surin Island. The most famous dive sites of Thailand, Richelieu Rock is an isolated diving pinnacle to the east of the Surin Islands. The site is marked by the top with a pinnacle which is 1 metre above the sea level during low tide, and disappears underwater during high tide.

The horseshoe-shaped reef discovered by Jacques-Yves Cousteau on his way to the Similan Islands is known for its purple corals (it reminded Jacques Cousteau of Cardinal Richelieu´s purple robe) as well as diverse marine life ranging from small fish and harlequin shrimp to large pelagics like whale shark, manta ray, barracuda and grouper. The pinnacle falls steeply to the surrounding sand bottom at a maximum depth of 35 metres. The south side is a bay with a slope that gently falls to the deep, while the rest comprises sheer walls, groups of rocks and numerous small caves that are home to various marine life.

Due to the large scale of Richelieu Rock, it is not possible to explore the whole site in one dive. You should plan at least two dives here. Enter at the southeast mooring line and then take the left or right side depending on the current. Ascend with caution, when finishing every dive use a surface marker, swim away from the pinnacle and surface slowly, looking for boat traffic all the time.

Amazement awaits divers in every square metre of Richelieu Rock. Slowing down your pace gives you the reward of a chance to meet rare, camouflaged species. Always keep an eye over your shoulder in case of passing Whale Shark.

Without doubt this is ¨The Highlight¨ during any of our liveaboard trips with The Manta Queen Fleet. 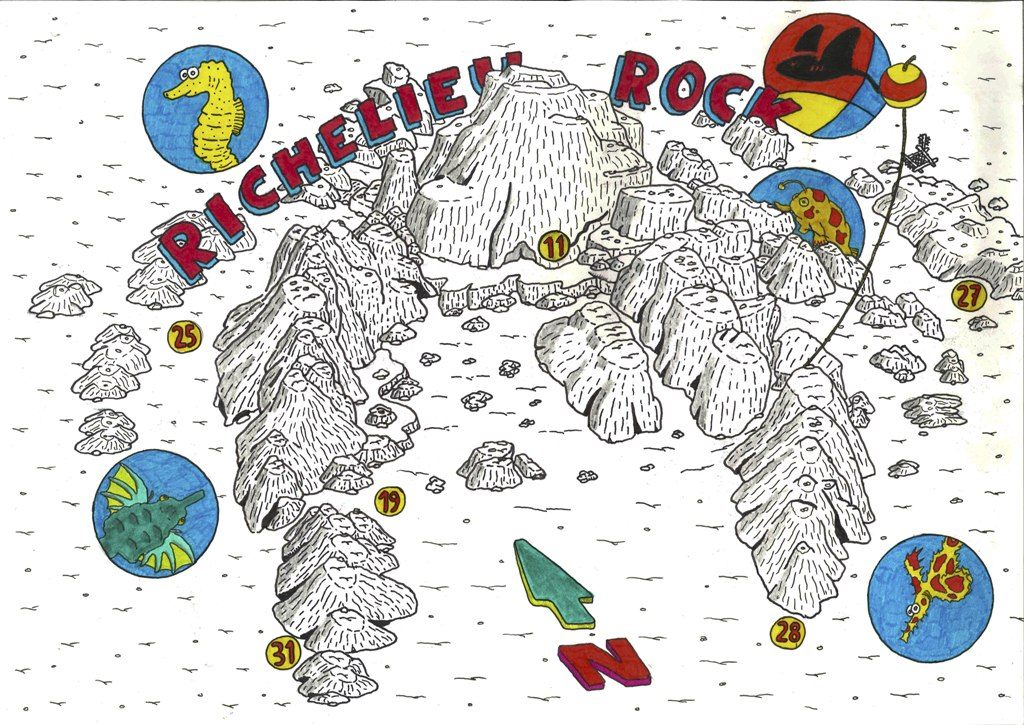 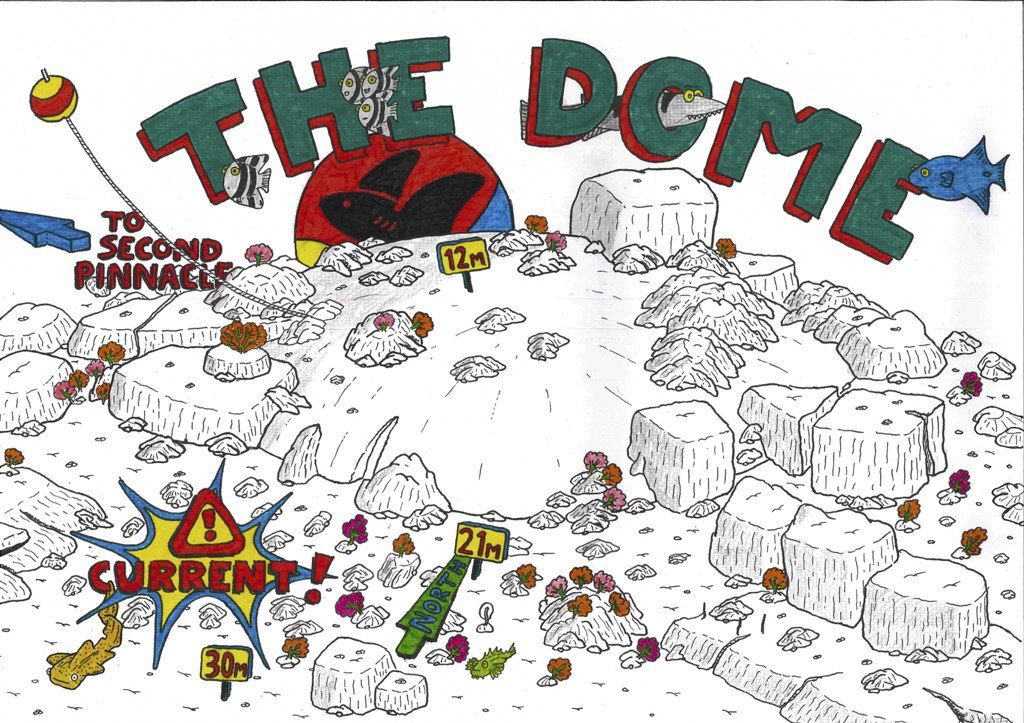 Koh Bon Thailand is a granite islet situated some distance to the northwest of the Similan Islands, however it is still considered to be part of the Similan National Marine Park. A favourite dive site is the western ridge of the islet two hours away from the Similan Islands, which falls steeply away to the deep. Our Manta Queen fleet usually park in a bay located south of the ridge, where they have maximum protection against wind and strong waves.

The diving reef slopes from a diving depth of 10 metres down to sandy diving bottom at 25 to 30 metres. The majority of corals here are hard corals including staghorn coral and brain coral that are interspersed with a few big coral heads.

Some 800 metres to the northwest of the island, there is a submerged pinnacle, which is sometimes marked by a buoy set by the Similan National Marine Park based in Khao Lak, although it is often washed away, thus a depth finder is essential here. The pinnacle is at a depth of 18 to 45 metres and is covered by an abundance of yellow soft corals and large sea fans ideally for khao lak scuba adventures liveaboard diving boats for both thailand PADI scuba courses and khaolak liveaboards as much as Thailand diving liveaboards like the mantaqueen fleet. 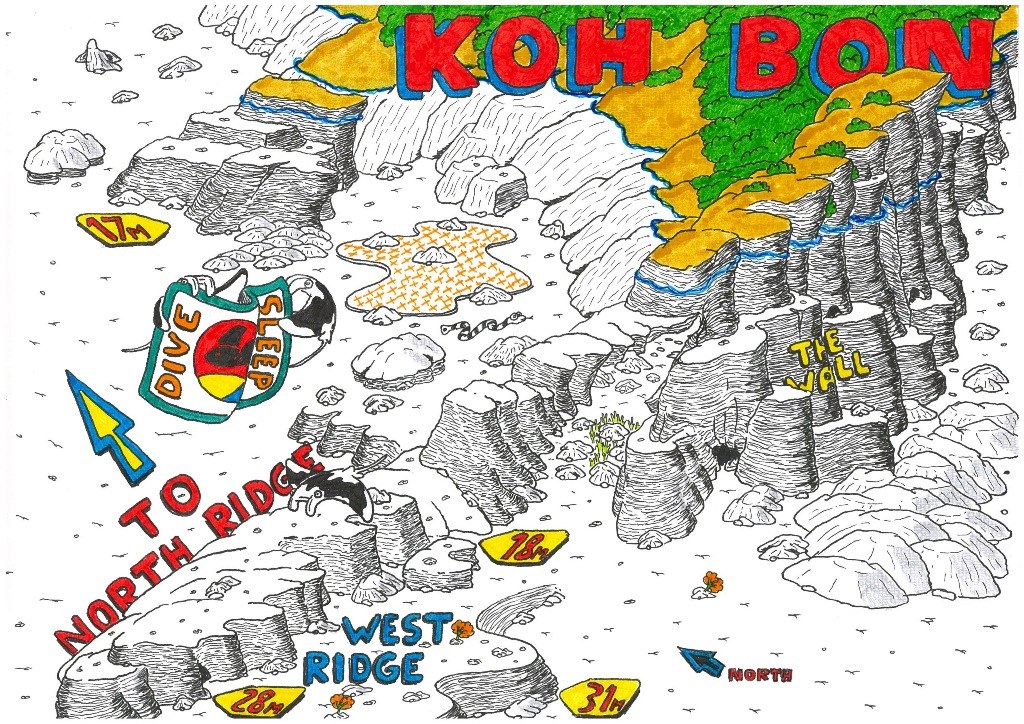 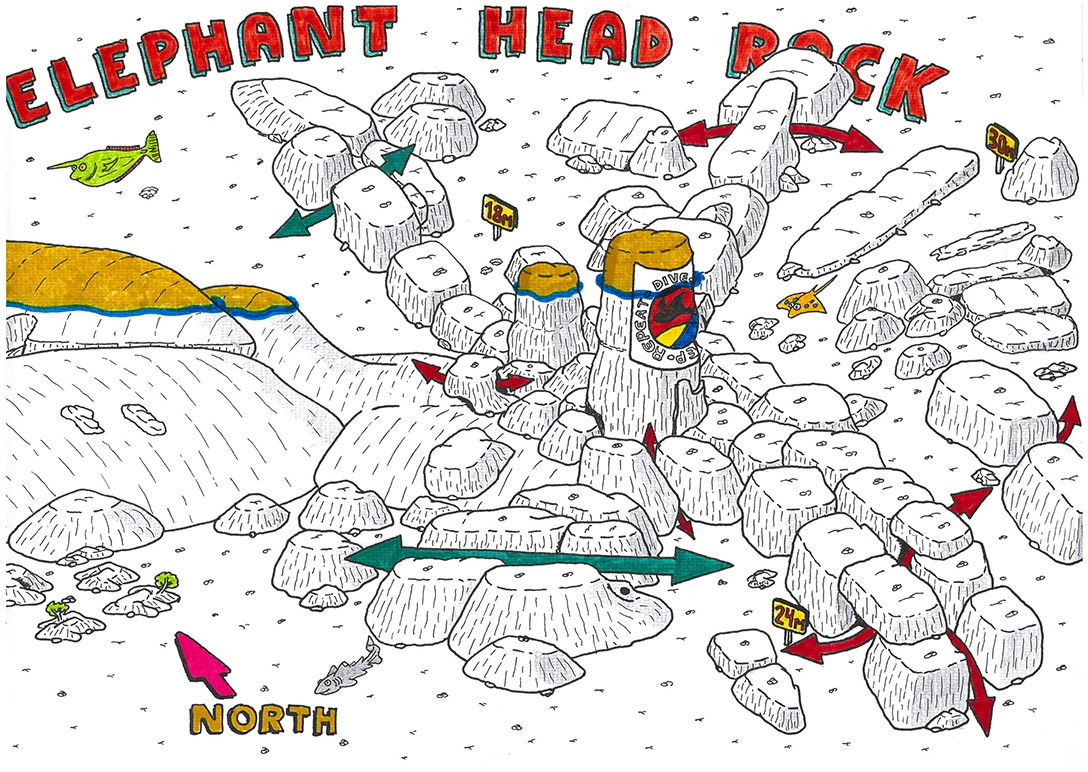 If you’ve ever heard about the Similan Islands, then it’s certain you’ve heard about this site. Located between Islands 7 and 8, this first thing you will notice before you dive is one massive boulder rising above the surface, and next to it are another three boulders. The site is named for the largest and tallest boulder, which is said to resemble the head of an elephant. You may need to use your imagination as you look.

The site is a massive labyrinth, complete with channels, swim-through’s, and holes at every turn. Lucky for us that our exit point is always up or maybe you would end up lost amongst the towering boulders.

Good luck in the deeper areas with spotting Whitetip Reef Sharks, who tend to reside in the depths.

Watch out for the washing machine currents that sometimes show up. Never try to fight these, as you will not win! Just go with the flow, relax, and ride them out.

Located 200 meters north of Koh Bon’s north ridge not far from Similan diving, this impressive deep Thailand pinnacle is worth a Thailand liveaboard dive even if it’s just to stare in awe at the breath taking topography of this Thailand diving underwater mountain.

This is one of the Thailand diving sites where you will be asked to do a negative scuba entry. The top of the diving pinnacle starts at 18m, so during the diving descent you are completely exposed to the currents.

The idea is to arrive on the top of the Thailand liveaboard diving pinnacle as soon as possible, as to avoid being blown off the khao lak dive site. Without a diving mooring line to use for the padi scuba descent, we are forced to jump in the similan water with the BCD completely empty, and descend straight away, finning to the top of the scuba pinnacle, where your manta queen dive guide will ask the first “OK?” Don’t worry though! Erase your serious face! Your khao lak scuba adventures dive guide will give you all the liveaboard scuba information you need for the similan liveaboard dive, and will address any worries you may have, in their enthusiastic and thorough manta queen dive briefing.

Check the deeper area for similan leopard sharks, thailand marble rays, and spotted eagle rays. Careful with dive buoyancy around this wall of the thailand dive pinnacle, as it drops down to about 50 meters.

Keep an eye out for the really special Sponge Snail that, in theory, resides in the Maldives but is spotted in the Thailand Liveaboard Andaman area and the Similan Islands as well. 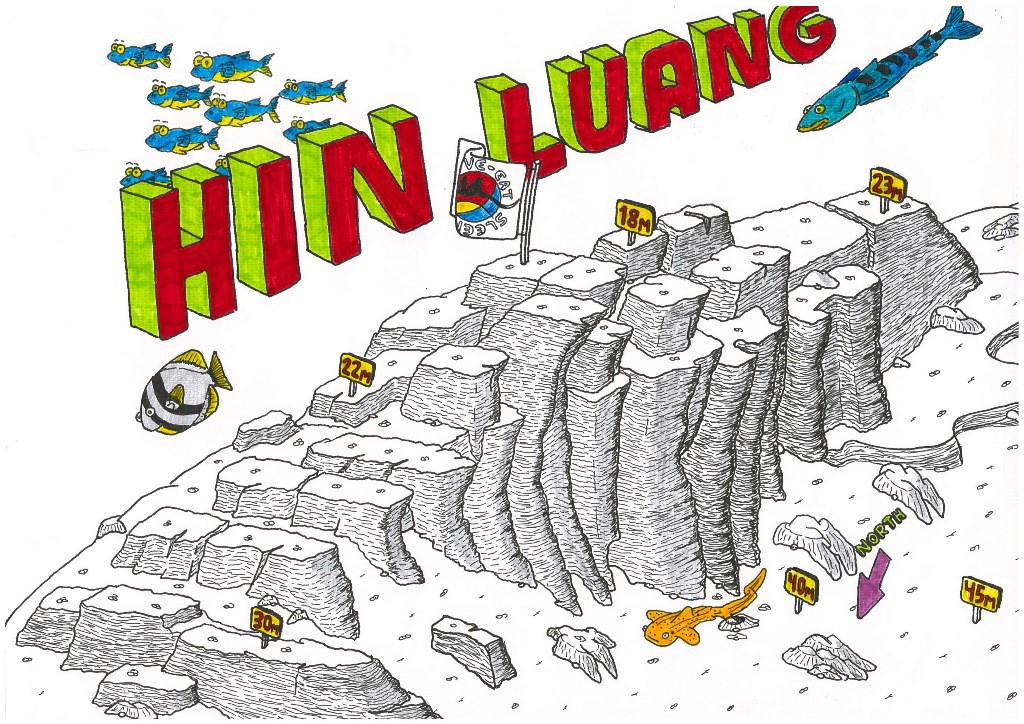 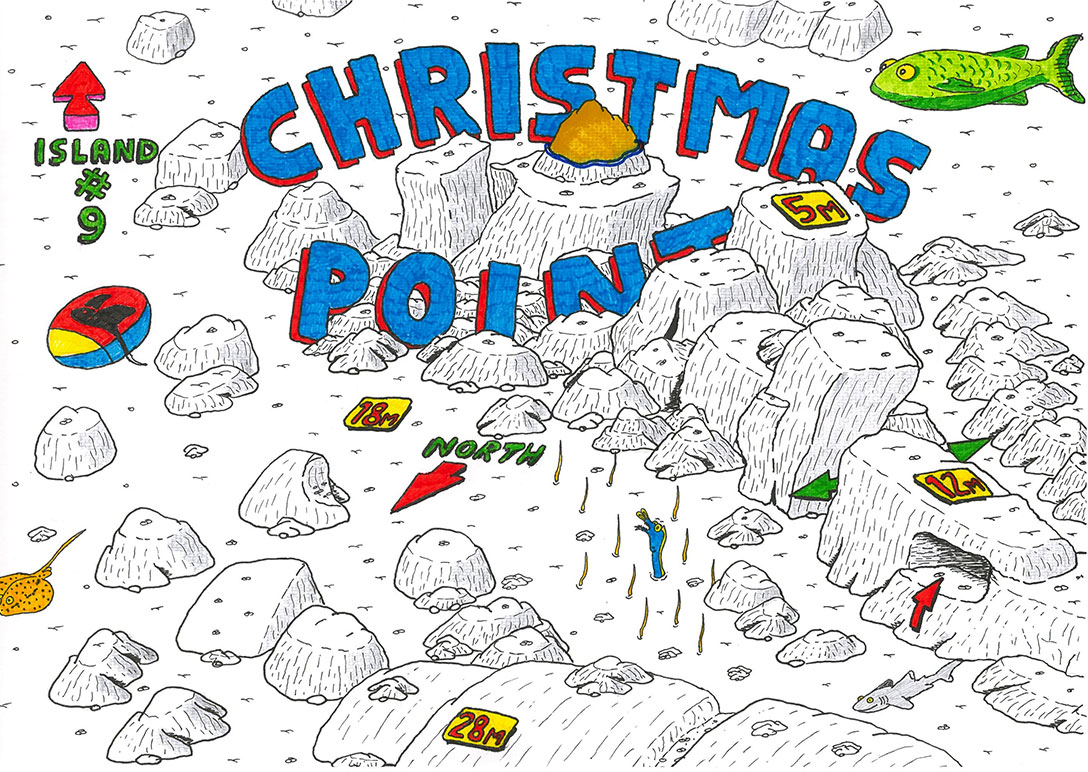 This is definitely a dive site to bring your camera! With the maze of granite boulders and swim-throughs photos really capture the beauty of this site.

Ribbon eels and Orange-spotted Pipefish can be seen around the edge of this dive site as well as Napoléon Wrass and the occasional Eagle Ray. Anemones with Porcelain Crabs inhabit the crevasses and Nudibranches galore can be seen crawling over the boulders.

About 300 metres to the northwest of the liveaboarrd diving site lies another pinnacle. This fantastic similan island pinnacle is totally covered with soft Thailand corals and giant sea fans. However the top of the Thailand divesite pinnacle is at about 30 metres and falls steeply to betwen 40 and 45 metres, which is in excess of the limits for PADI Thailand recreational liveaboard diving. Divers should note that there is no shelter between this pinnacle and the shallower site, so heading back from the Liveaboard Thailand pinnacle requires care in case of currents, however you may be rewarded with the sight of leopard sharks resting in the sand 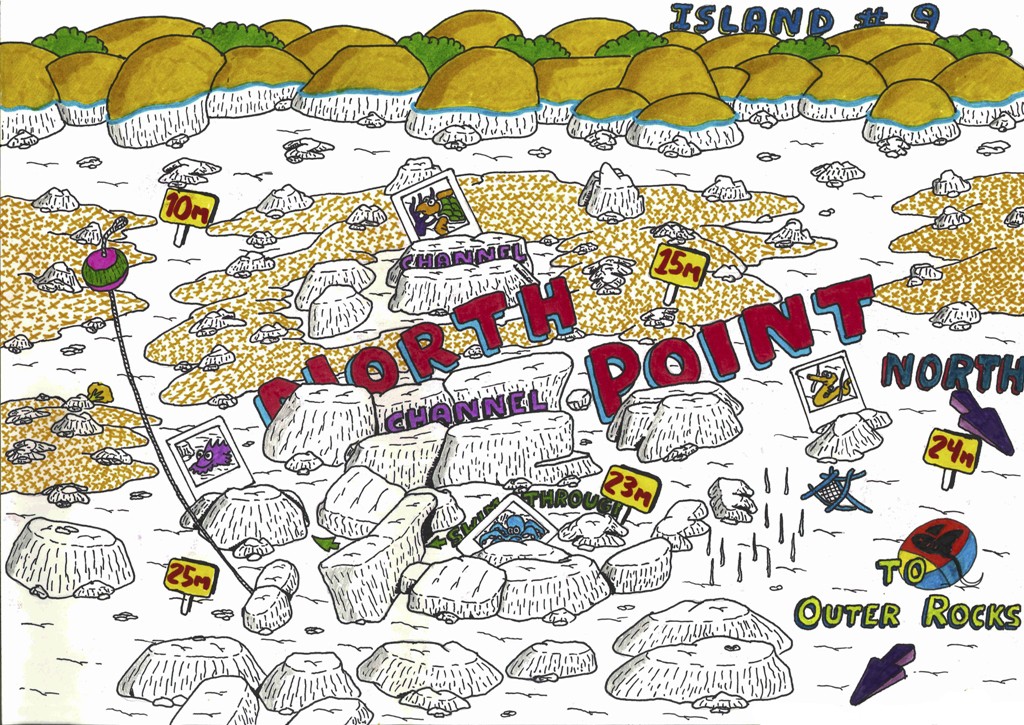 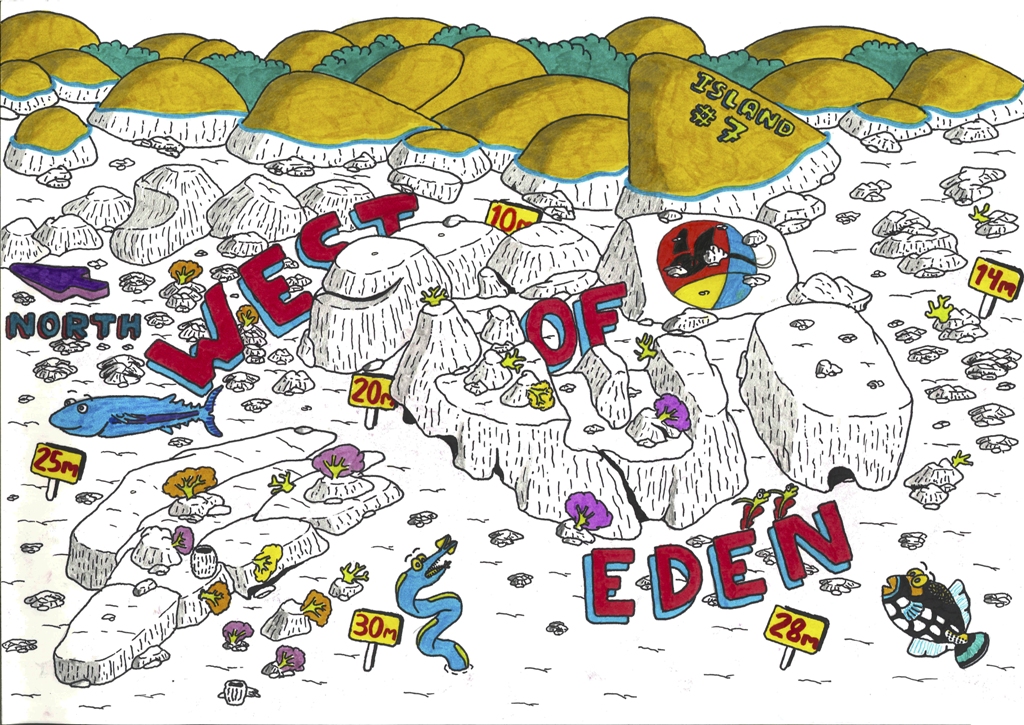 When East of Eden became too crowded divers started to look for other Liveaboard Thailand dive sites in the area, they went to the west side of Koh Pa-Yu (Island 7) and discovered that the Garden of Eden does not only face east.

Some areas are characterised by rubble and sand slope falling to a depth of 30 to 35 metres. The shallows are home to many reef fishes, and have stacked granite boulders covered with hard corals, soft corals,gorgonians and feather stars.

The reef slope ranges from 5 to 40 metres. In the north of the Similan diving Island, there is a cluster of staghorn coral and blue coral punctuated by sparse rocks for Thailand Liveaboard Trips. In the middle of the site, you will find mostly sand and scattered fire corals.

The highlight of the Thailand and Similan diving site is a pinnacle called Ruan-Mai (the Orchid Garden), which is covered with colourful soft corals and sea fans, a magnificent sight that shows the diversity and beauty of the marine life in the reef for Similan Liveaboard and diving in Thailand. This dive site is believed to be one of the best in the Similan Islands by experienced PADI scuba divers. On the southern side, some further corals can be found. In addition, in the shallow parts, you will find a huge plain of small grass-like soft corals on the sand that create a very pretty picture that looks similar to an underwater Japanese garden.Welcome onboard the Manta Queen Fleet and the Similan Island Liveaboard Operator Manta Queen 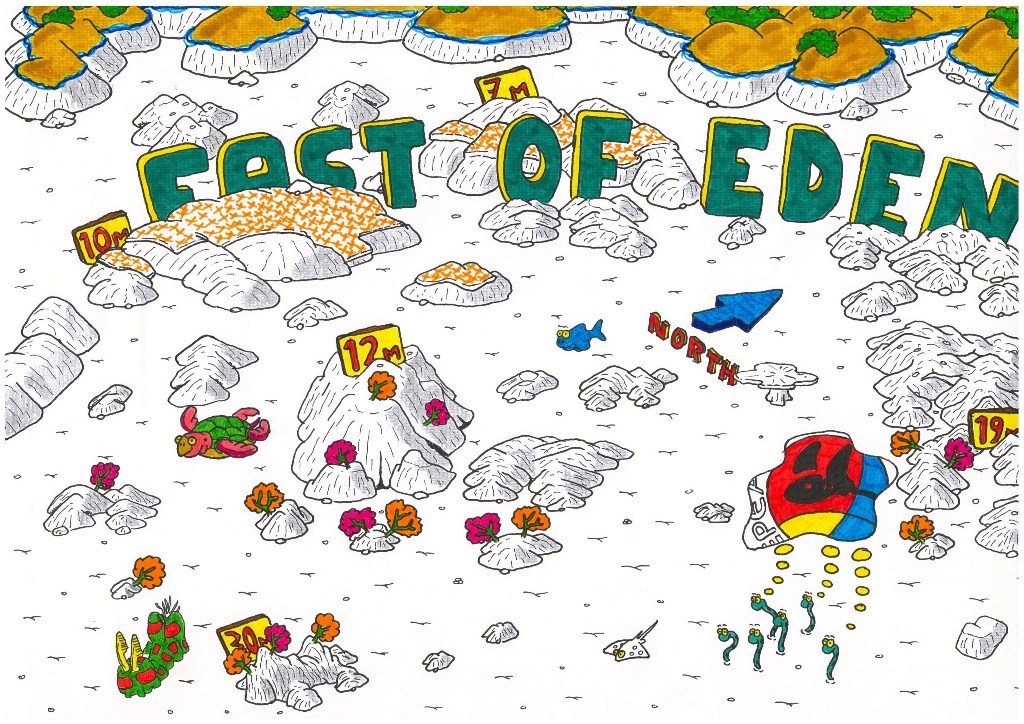 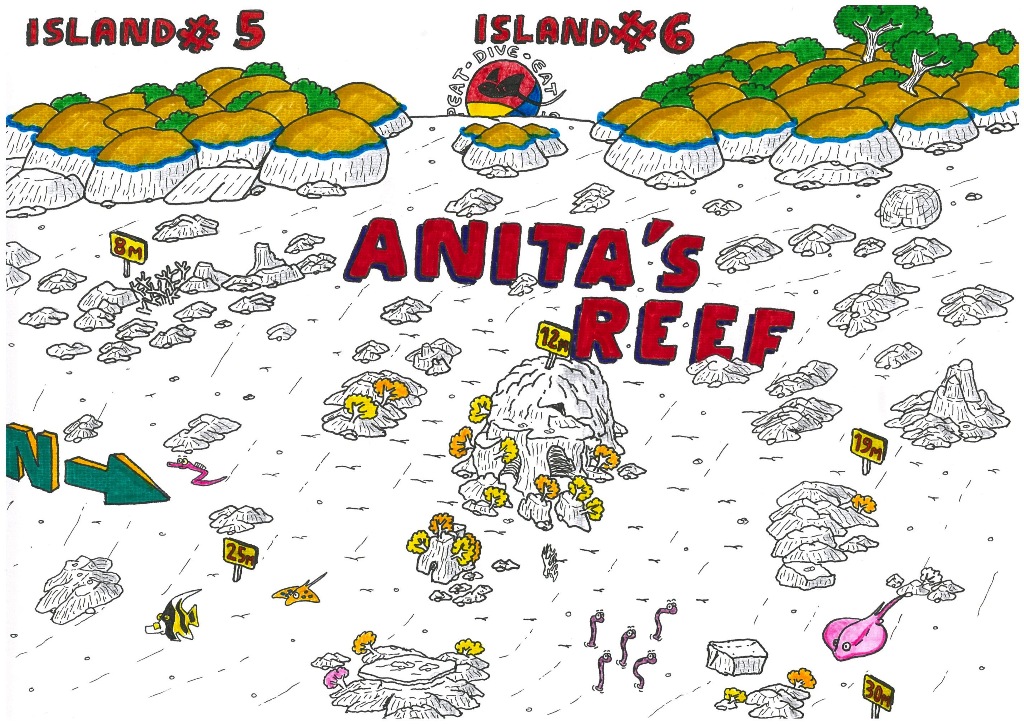 A big outcrop located on the south east makes this dive site unique and attracts many photographers at the liveaboard Thailand divesites. From the sandy bottom base at 20 metres to the top of the rock at 12 metres, this fantastic rock is surrounded by various colourful soft corals, gigantic sea fans, and many species of hard corals. The thai name for this spectacular rock is "Hin Muan Deaw" meaning "Whole roll [of film] rock", is the best way to describe how beuatiful this must-see rock really is. At the south side of Liveaboard Thailand Anita's Reef are gigantic boulders that extend from similan island 5 and continue southward. These gigantic boulders lie at between 30 and 35 metres on the sandy bottom, and form a channel to swim through.

in 2003, the Similan National Park authorities sank a 30m x 12m fibreglass fishing boat in the area to create a new dive site known as Tuna Wreck, which is located to due south of the south western corner of similan island #5, marked by a buoy. The wreck sits on the sandy divesite bottom just beyond the outer edge of the reef, with the depth varying from 28m metres, down to the deepest point at 40 metres Thailand diving depth.

Sunk in 1985, this tin dragger went down in 20 meters of water, after somebody flushed the toilet and the water started rushing in and did not stop!

Over several years, it became colonized by thousands upon thousands of fish, glad to be lucky enough to have to an artificial reef in a vast expanse of sand. When the tsunami hit in 2004, it broke the structure into four main pieces, making it ever more interesting.

Around the wreck, which locals describe as “fish soup,” you will pass through clouds of snappers, fusiliers, batfish, and trevally as you look for the special things living within the wreck and in the surrounding sand. Crocodile fish, stonefish, scorpionfish, lionfish, ornate ghost pipefish and much more reside with the kings of the site, the nudibranch. Do you think you will be able to find more than 10 different species on the same dive? I know I will!

Avoid penetrating the wreck at all costs. Since the tsunami broke it apart, the separate structures are very unstable. Also keep your eyes peeled for the many lionfish found hovering about the entire site. They always have the right of way. 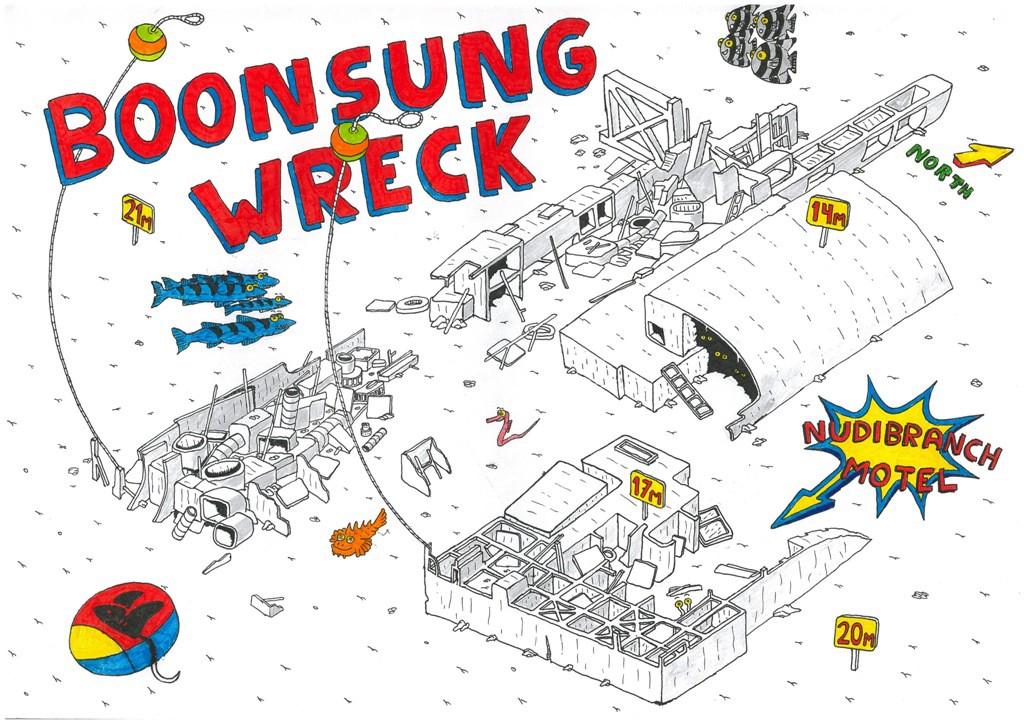 We pride ourselves to offer the best tasting Thai cuisine on board our complete fleet. We offer a variety of Western dishes too during your cruise. We are able to cater to Vegetarians, Vegans and on all our boats we banned the use of Monosodium Glutamate. If you are allergic to Nuts or other food ingredients please tell us during your check-in at Khao Lak Scuba Adventures. For more information or special requirements, please contact us. 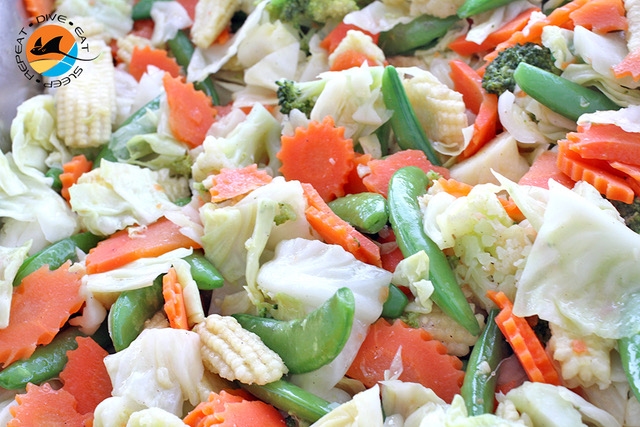 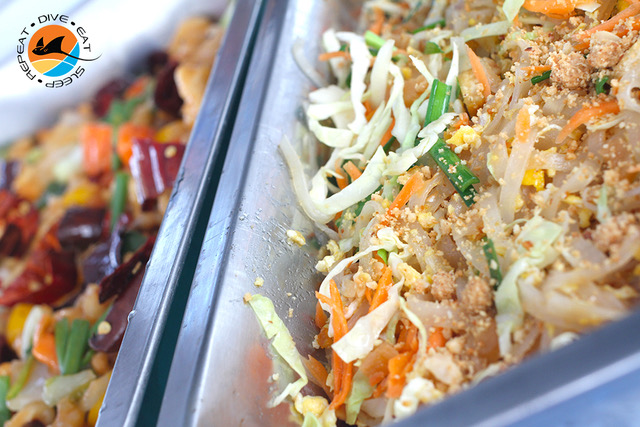 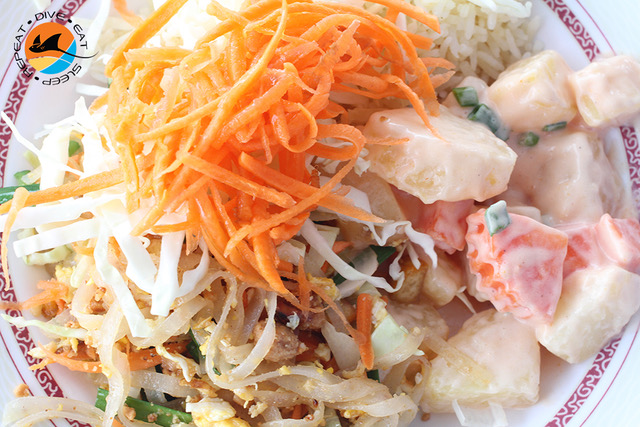 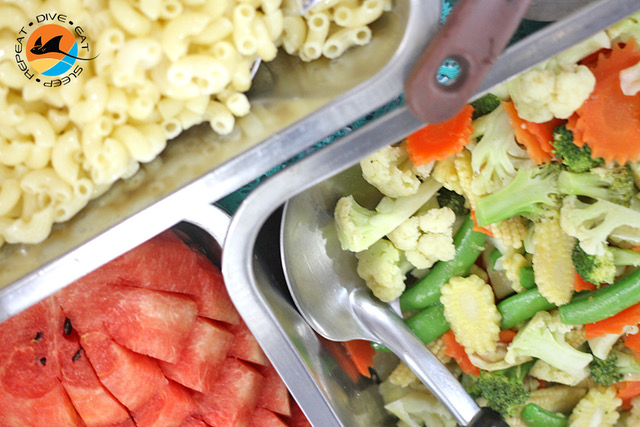 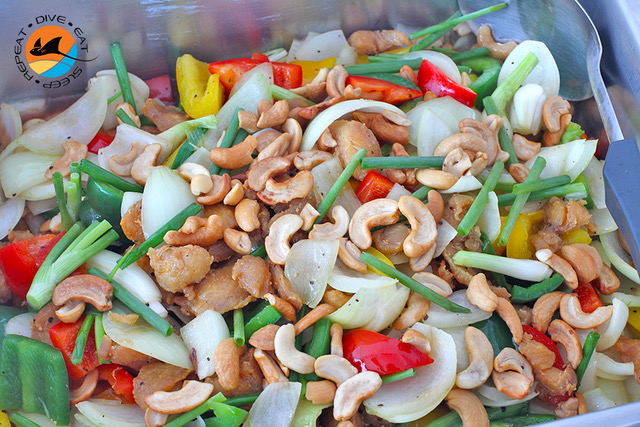 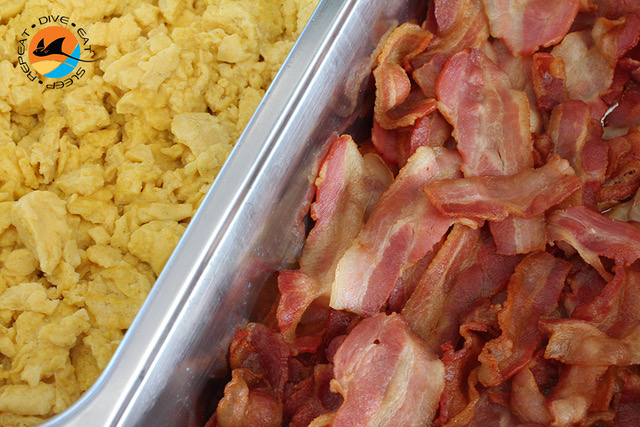 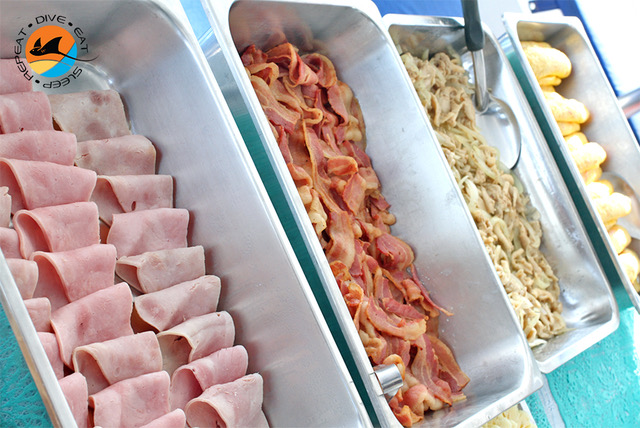 You will arrive back to your Phuket hotels approximately between 7 to 8 pm. 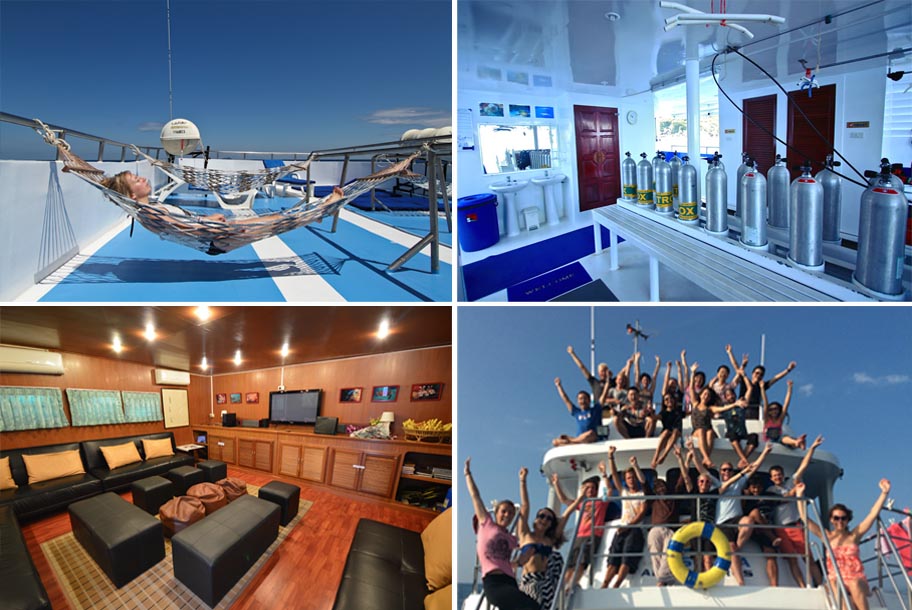 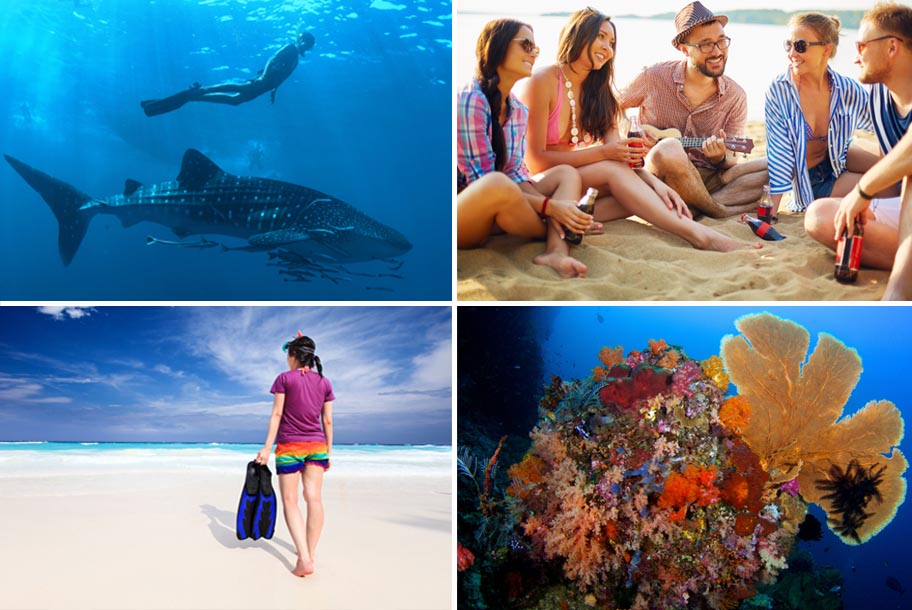 Join us onboard „THE MANTA QUEEN FLEET“ for a amazing Cruise to one of the top divespots in the world. INQUIRE NOW